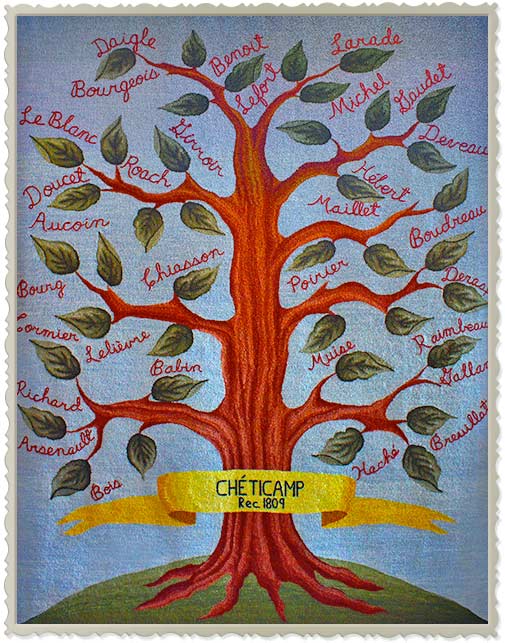 Using an important number of historical documents and more than 100,000 genealogical files compiled by Father Charles Aucoin, they make searches and prepare family trees for clients whose ancestors were from Chéticamp and surrounding areas or even for people who quite simply take a particular interest in genealogy.

In addition to this painstaking research, they spend an important amount of time preparing new records and updating existing records as required by studying birth, marriage and death notices of many Canadian and other newspapers. They also maintain links with genealogists and historians from other Canadian provinces, the United States and overseas.

The volunteers at Centre de généalogie Père-Charles-Aucoin are always happy to greet visitors. Come for a visit. Or reach out to our volunteers by:

A bit of history

Born in Chéticamp in 1911, the late Father Charles Aucoin completed his grade 11 at Our Lady of Annunciation (now NDA) school in Chéticamp before pursuing his post-secondary education at Collège Sainte-Anne (now Université Sainte-Anne) in Baie-Sainte-Marie, Nova Scotia. In 1931, he was admitted to the novitiate of the Eudist order in Charlesbourg, Québec and ordained priest in 1936.

Always passionate about the history of his native village and its families’ genealogy, Father Aucoin returned after his retirement in 1973 to realize his dream of studying the roots of the Acadian ancestors of Chéticamp and surrounding areas.

In the 1970s, Father Aucoin was a major player in the resurgence of the Société Saint-Pierre, playing a leading role in obtaining funding for the construction of the building Les Trois Pignons. Head office of the Société as well as a cultural centre, Les Trois Pignons has also become a major tourist attraction. During his retirement years, Father Aucoin restored the old parish records of Chéticamp, Saint-Joseph-du-Moine and Margaree parishes and compiled a written record of all tombstomes in the old cemetary of Chéticamp.

It is hard to imagine where he found time, but during the same period , he published several articles on the history and genealogy of the Acadians in Chéticamp and accepted several invitations to speak and lecture on the history of the region. He also maintained a unbelievable amount of correspondance with people seeking information about their genealogy.

Before his death in 1999, Father Aucoin had amassed a huge collection of more than 100,000 genealogical records on the Acadian families of the three parishes as well as many old documents and photos of Chéticamp and area. This important collection of photos and documents is available to the many visitors researching their roots.

The late Edmond Burns joined the team of volunteers at the Centre in 1984 following his retirement from teaching. Before his death on November 1st, 2009, he concentrated on discovering and preserving the history and genealogy of the region’s Acadian families. He carefully studied the newspapers looking for birth, weddings or deaths announcements involving local residents or their descendants.